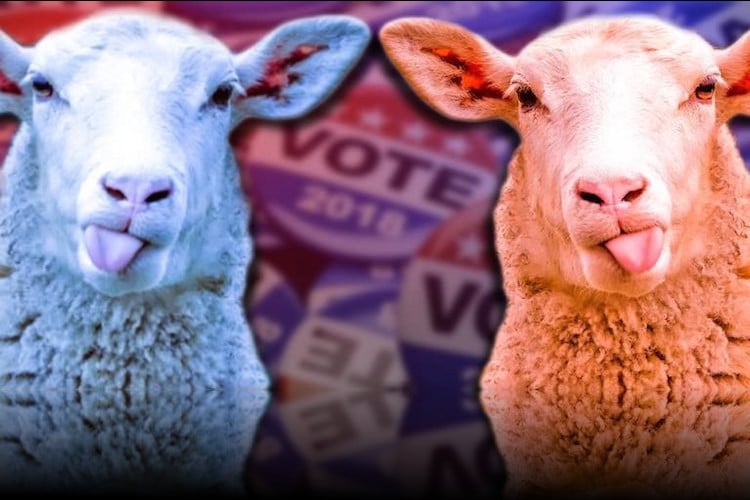 “Democracy is two wolves and a lamb voting on what to have for lunch. Liberty is a well-armed lamb contesting the vote.” ~Attributed to Benjamin Franklin


“Well-armed” doesn’t necessarily need to mean militantly locked and loaded. It can just as easily be a higher consciousness metaphor for knowledge. Indeed, a well-armed lamb is a knowledgeable lamb. As Doctor Who said, “You want weapons. Go to a library. Books are the best weapons in the world.”

A well-armed lamb can eventually transform into a lion. In a world of blind obedience to authority, it takes a particular flavor of courage (mostly the courage to question authority) to wake up the blindly obedient (sheep) to the extent of their ignorance, and to poke holes in the unhealthy, unsustainable and violent power constructs (sick society) built by entrenched authority.

The blindly obedient are the lambs. The entrenched authority are the wolves. And the uncommonly courageous are the lions.
As stated in the movie Robin Hood, “Rise and rise again, until lambs become lions.”

“Beware of the good and the just! They like to crucify those who invent their own virtue for themselves.” ~Nietzsche
Making America Great Again is Making America Free Again. The only thing that is truly anti-American is anti-freedom. Lambs and wolves are afraid of freedom for different reasons.

Lambs are afraid to lose their comfort, security and safety, and thus cling to it at the expense of freedom. Wolves are afraid to lose their power and are intent upon keeping everyone divided and afraid so that they can maintain their overreaching power. The lion breaks the vicious cycle with small and large acts of courage by checking the entrenched (and thus corruptible) power of wolves.
But how does a lamb transform fear into courage and thus become the brave lion who is capable of keeping wolves in check? The lamb must first put itself in check by questioning why it believes what it believes about the way the world works.

The lamb must ask itself: Are my beliefs merely culturally conditioned by a sick society? Have I been brainwashed into believing a certain way by a religion or political party? Do I just blindly obey out of fear of losing my comfort, safety and security? And, most importantly of all, once I realize I’ve been mistaken, will I cease being mistaken or will I cease being honest?

It’s a tricky tightrope between fear and courage, and the menacing maw of the abyss is ever-present beneath it. The way toward freedom is not for the faint of heart. Which is probably why there are so few lions among men.

A lamb that can manage to question its fear-based lifestyle –which is built upon blind obedience, addiction to comfort, and reliance on wolves to keep them “safe”– is a lamb that has the potential to become, at least, a well-armed lamb, if not a courageous lion.
If a lamb can manage to become a well-armed lamb or to transform itself into a courageous lion, then the next step is to show its teeth (knowledge/courage) to the world.

“Those who make peaceful revolution impossible will make violent revolution inevitable.” ~John F. Kennedy
The First Amendment gives every American the right to “petition his government for a redress of grievances.” No matter the seeming “goodness” or “righteousness” of that government.

You Deserve To Know The Truth, And You Must Know How To Defend Yourself From Your Own Government And Those Who Really Control It

Well-armed lambs and courageous lions are able to take advantage of the first amendment as a platform for speaking truth to power.
Whether through peaceful protests (Thoreau’s civil disobedience), or revolutionary speeches (MLK jr./ JFK), or hard-hitting political articles, or even radical eye-opening art; the first amendment is a platform for freedom. It must be protected at all costs.
Free speech should never be controlled by an authority. No matter how popular that authority. Free speech is paramount for freedom to exist at all. As John W. Whitehead said, “If the government can control speech, it can control thought, and, in turn, it can control the minds of the citizenry.

Lest we become a nation of mindless sheep, free speech must be protected at all costs against the wolves who seek to muzzle lambs. It is protected by well-armed lambs and courageous lions with the mettle and the wherewithal to speak truth to power.

Don’t kowtow to the chain of obedience (but don’t be violent either):

“Disobedience is the true foundation of liberty. The obedient must be slaves.” ~Henry David Thoreau
Never confuse patriotism with blind obedience. Many a cowardly lamb makes this mistake. And many a cowardly wolf uses it to lord power over lambs.

Sometimes being a true patriot means questioning power. Especially if that power is violent, unjust, and overreaching. As Barbara Ehrenreich said, “Dissent, rebellion, and all-around hell-raising remain the true duty of patriots.”
Don’t allow yourself to be brainwashed into believing that everything the government does is for the good and anyone who opposes the government is an enemy.

There must be checks and balances. Fallible individuals checking the power of systems made up of other fallible individuals is the only way to prevent the power within those fallible systems from becoming corrupt. Let alone from corrupting absolutely.
It is vital that whatever we are freeing ourselves for, and whatever freedom we are advocating for, does not violate the nonaggression principle. A truly virtuous system is never directly violent. It is only ever violent in self-defense. The moment a so-called virtuous system becomes directly violent it ceases to be virtuous.

The only moral exception to this fact is when violence is necessary to defend against direct violence –and, even then, only as a last resort. Any attempt to use violence to force others into compliance is a violation of the nonaggression principle and therefore unvirtuous and unfit for either well-armed lambs or courageous lions.

Don’t be a cowardly lamb or a cowardly wolf. Rise above the “need” for safety and security at the expense of freedom and liberty. Become a well-armed lamb contesting all votes and proactively voting with your feet. Better yet, become a courageous lion and dare to become a brave David in the face of the hyperviolent Goliath of the state.

About the Author
Gary ‘Z’ McGee, a former Navy Intelligence Specialist turned philosopher, is the author of Birthday Suit of God and The Looking Glass Man. His works are inspired by the great philosophers of the ages and his wide awake view of the modern world.
This article (The US is Becoming a Nation of Sheep – Here’s How to Stop It) was originally created for The Mind Unleashed and is published here with permission. It may be re-posted freely with proper attribution and author bio.