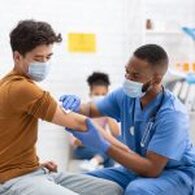 FacebookEmailShare (NaturalHealth365) “Conspiracy theorists” have said a lot of things over the past year and a half: injection “passports” will be pushed onto the public, the science behind mask effectiveness is not clear-cut, lockdowns will do more harm than good.
​
Another thing so-called conspiracy theorists have been saying all along is that people who decline the experimental jab will be blamed for the proliferation of vax-resistant COVID virus variants … but new peer-reviewed data suggests that it’s the people who received the jab who could be contributing to these viral mutations.
Are jabbed people contributing to the development of vax-resistant variants or coronavirus “escape mutants?” New study says yes What happens when we overuse antibiotics or use them improperly?

Some bacteria live.  Indeed, some bacteria become stronger and evolve into new strains that are impervious to antibiotics, thus rendering these drugs useless.  This is the exact phenomenon behind “antibiotic resistance,” which the World Health Organization (WHO) and U.S. Centers for Disease Control and Prevention (CDC) call one of the “biggest public health threats of our time.”
As we reported in April 2021, medical experts around the world have been warning about a similar phenomenon that could occur with investigational COVID injections.

“There can be no doubt,” Bossche said of the massive push to inject everyone, “that this situation will soon lead to complete resistance of circulating variants.”
​
Now, a new study published in Scientific Reports offers evidence of this very phenomenon.
The study, conducted by researchers from Austria, Switzerland, and Spain, used statistical modeling to investigate how SARS-CoV-2 variants mutate and become “resistant” to injections.  Three primary risk factors for these “escape mutants” include: Additionally, the researchers found in their modeling that “the highest risk of resistant strain establishment occurs when a large fraction of the population has already been [injected] but the transmission is not controlled.”
The researchers called this result “counterintuitive.”
​Fighting fire with fire?  Massive rollout of COVID shot driving drug-resistant viral variants – but local, state and national officials continue to hint at the need for booster shots

Meanwhile, the U.S. Centers for Disease Control and Prevention (CDC) admits that jabbed people can become infected with SARS-CoV-2, and are just as likely to infect someone else as an unjabbed individual.  Unfortunately, most people are not hearing this kind of message from the mainstream media.

Instead, most media outlets have wasted no time using this study as justification for the reinstatement of mask mandates, even for people who have been jabbed.  Plus, not to our surprise, public health officials say that the proliferation of jab-resistant viruses is proof that as many people as possible need to be jabbed as quickly as possible.

Ultimately, our best defense against any health problem is a strong immune system.  Maybe we should just focus on that, instead of these experimental injections.  What do you think?
​
Sources used for this article include:
CNN.com
Nature.com
Childrenshealthdefense.org