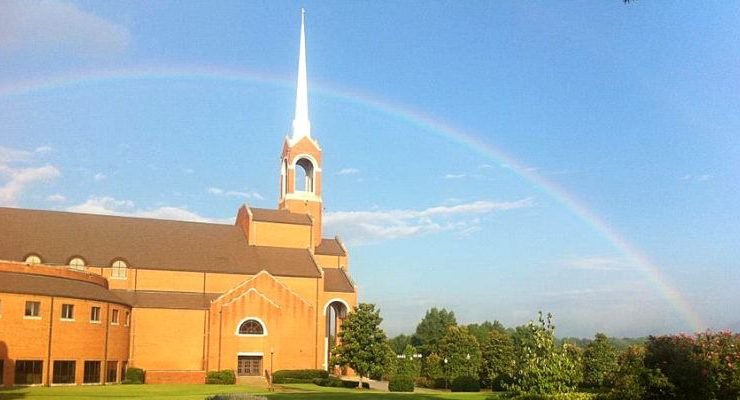 THE SEPARATION OF CHURCH AND STATE IN THE UNITED STATES HAS TAKEN YET ANOTHER BLOW—THIS TIME IN ALABAMA. By Elias Marat, The Mind Unleashed

(TMU) — The separation of church and state in the United States has taken yet another blow—this time in Alabama. Republican Governor Kay Ivey has signed legislation allowing a Presbyterian Church to perform state-like functions by establishing its own police force for its churches and schools.

The law, which was approved during the most recent legislative session, permits the Birmingham-based Briarwood Presbyterian Church to establish a private law enforcement agency that would have the power to make arrests if crimes are committed on church grounds or on its private school campuses, according to the Associated Press.

Officials at the church claim that such a private police force is needed to secure the church and the 2,000 students and faculty on the two private school campuses it owns and operates.

The law, which is set to come into effect this fall, allows the church to deploy the private law enforcement agency in the two counties where the church has such facilities, and grants their police the powers typically restricted to public police agencies.

Critics have argued that the measure flies in the face of the Establishment Clause of the First Amendment to the U.S. Constitution, which prohibits the government to establish an official religion, by granting government powers to a religious institution.
Critics also argue that the law is unnecessary, given that the mega-church currently operates its own private security force.

Attorney Ken Riley believes that other mega-churches in the state are likely to follow suit. He told WBRC:

“I think that other congregations and academies could be on the fast track … They would at least have the precedent of Briarwood and Madison Academy being able to join the ranks of small colleges and universities.”

The church, which belongs to the conservative Presbyterian Church in America (PCA) denomination and is firmly ensconced in the Bible Belt, is no stranger to racism. Its parent body, the PCA, broke from the Presbyterian Church in the United States (PCUS) in 1973 due to what it called “liberal theology.” It turns out the PCA’s schism from the more mainstream PCUS was due to the former’s decision to allow black and white parishioners to worship together.

As black news site the Root notes, the church and its clergy have been notorious for touting bigoted messages, including condemnations of Disney for “promoting homosexuality” and pastors who lead outright white supremacist events such as celebrations of the slave-holding Southern Confederacy that lost the Civil War.

“Since its founding, Briarwood has been notorious for continuing to root for everyone straight, white and male. Not only does it not allow women to have leadership roles as ministers or deacons, but the church’s history is also rife with racism and homophobia.”
According to a statement made to WBRC by the Birmingham-based church, the law “allows certain educational institutions to appoint and employ one or more suitable persons to act as police officers to keep off intruders and prevent trespass upon the institution property.”

“We are grateful to the governor and our elected officials for approving our request to be added to the existing Alabama [law].”
Randall Marshall, the executive director of the Alabama Civil Liberties Union (ACLU), believes that the law also gives the church an ability to not report criminal activity that occurs on its property. He believes that the law will face significant challenges in court.